It is commonly accepted that modelling frameworks offer a powerful tool for modellers, researchers and decision makers, since they allow the management, re-use and integration of models from various disciplines and at different spatial and temporal scales. However, the actual re-usability of models depends on a number of factors such as the accessibility of the source code, the compatibility of different binary platforms, and often it is left to the modellers’ own discipline and responsibility to structure a complex model in such a way that it is decomposed in smaller `re-usable’ subcomponents. What reusable and interchangeable means is also somewhat vague; although several approaches to build modelling frameworks have been developed, little attention has been dedicated to the intrinsic re-usability of components. In this paper we focus on how models can be linked together to build complex integrated models. We review and investigate the various approaches to model linking adopted by a number of Integrated Modelling Frameworks and we aim at describing the advantages and disadvantages of each approach. We stress that even if a model component interface is clear and reusable in software terms, this is not a sufficient condition for reusing a component across different Integrated Modelling Frameworks. This remark reveals the need for adding rich semantics in model interfaces; we do such an attempt through the use of domain classes and ontologies. Finally, this paper presents a working example of an ontology formalisation developed for the Seamless project. This ontology (called SeamAg) aims to formally describe biophysical models related to agronomic and environmental domain to be developed by a large community of modellers within the Seamless project. Modellers’ knowledge, related to model subsystems, variables and interfaces, is kept separated from the actual implementation. The use of the SeamAg ontology for storing model interfaces supports the independence of software design choices from modelling knowledge, which be easily reused, integrated in different environments, or shared with third parties. The potentials of extending the presented ontology-driven approach is discussed not only for model linking, but also in the context of building model component workflows using web services. 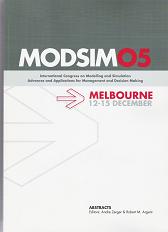